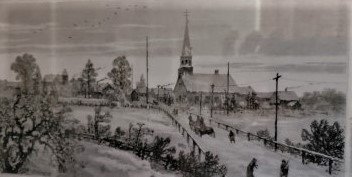 James Garfield relied on, and returned, the simple, unencumbered friendships he had developed over many years.  When he returned from the June 1880 convention that made him the Republican candidate for President, his neighbors welcomed him at the train station with a banner reading “Our Townsman, James A. Garfield.” When he left Mentor for his inauguration, several hundred gathered again at the station where the president-elect “said a few farewell words to my neighbors.”  Perhaps feeling a little wistful, President-elect Garfield wrote about the presidency in his diary: “The personal aspects of the presidency… are far from pleasant. I shall be compelled to live in great social isolation; almost everyone who comes to me wants something which he thinks I can and ought to give him, and this embitters the pleasure of friendship. I must confront the problem of trying to survive the Presidency, or as is said of criminals, live it down.”  Another excerpt from neighbor, E.T.C. Aldrich: “Feb. 28, 1880: Attended farewell reception for Gen. Garfield.” This same neighbor traveled to Cleveland for the funeral of President Garfield and his neighbor. “Sept. 26, 1881: To Cleve[land] to Gen. Garfield’s funeral services.”