19. Inside the Campaign Office 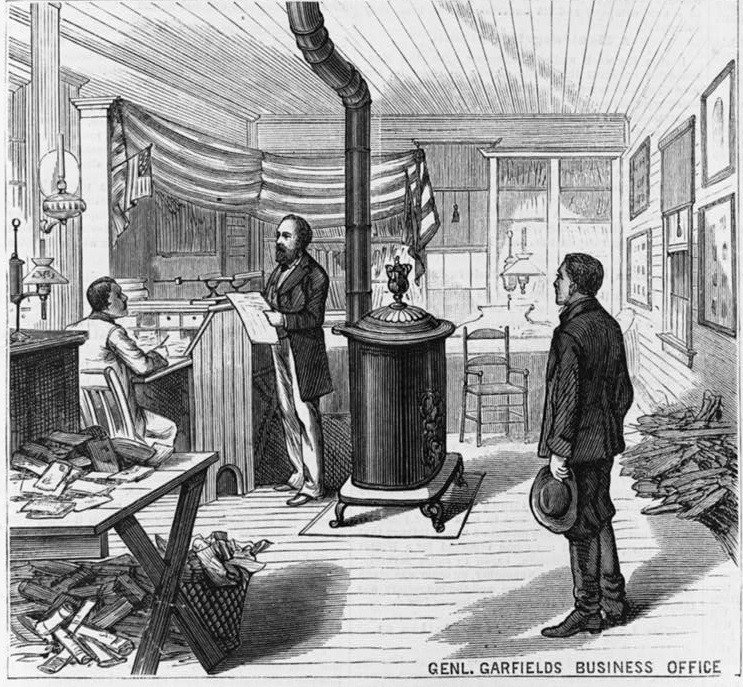 This office was a busy place during the campaign. The floor was littered with papers, and “with every arriving train came hundreds of letters, and newspapers by the sack. Not one of these was slighted, so far as reading is concerned, and a vast number of the letters were actually answered, the point of courtesy being stretched to include many that were frivolous and impertinent. The comparatively few really important letters were separated from the rest, and, in the intervals of quiet, and far into the night, the General was personally busy, reading, considering, and answering these.”

The Campaign Office became the center of activity on election night in 1880. Garfield and about twenty friends and political advisers were inside the building on the night of November 2. Election returns from all over the country were reported by telegram. Irvin, one of James and Lucretia’s younger sons, was busy taking a round robin letter from the campaign office to the parlor, where the ladies were gathered. The two oldest boys, James and Harry, were away at school, so this system of letter sharing allowed them to be a part of the excitement. At about midnight a telegram confirmed that the Republicans had carried the closely contested state of New York. James A. Garfield was elected the 20th President of the United States. Everyone in the campaign office was invited into the dining room for a celebration dinner.