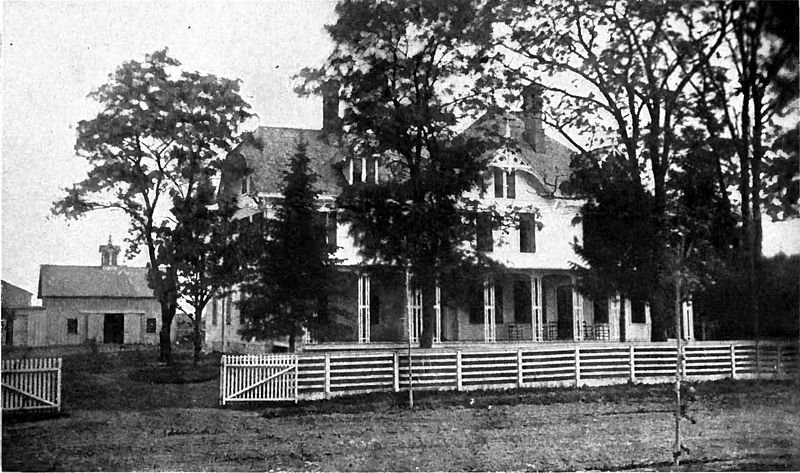 When James and Lucretia Garfield bought this home in 1876, it was a nine-room, one and a half story farmhouse. In the spring of 1880, they enlarged the home to two and a half stories, with a long, inviting porch across the front. Mentor Avenue, then as now, was the way many visitors approached the house, entering through a gate here near the west end of the porch. Some delegations arrived at nearby train stations and were escorted to the candidate’s gate by “Garfield Guards,” young local volunteer escorts with torch lights and brass band music.

As many visitors and reporters wanted to talk to the presidential candidate, Mrs. Garfield was a pleasant hostess. If a reporter entered the home, it was said that she would offer them what she called “standing refreshment”: lemonade, but no chair in the entrance hall, which was the farthest they would get.   In Garfield’s time it was tradition that presidential candidates did not leave their homes and campaign for themselves. The candidates depended on party surrogates to do so, although Garfield was different. He wrote in his diary “If I could but take the stump and bear a fighting share in the campaign, I should feel better.”  He was advised not to make any journeys or speeches during the campaign and sitting President Rutherford B. Hayes even suggested that he “sit cross-legged and look wise” until after the election." During the summer and autumn of 1880, James A. Garfield ran a successful presidential campaign - the nation’s first “front porch campaign” from the steps of the front porch.   Two famous visitors to the Garfield home during that summer were former President Ulysses S. Grant and New York Senator Roscoe Conkling; the meeting was named the ‘Treaty of Mentor’ by reporters since Garfield came from a different faction of the Republican Party than Conkling and Grant.  Another group that visited during the late summer of 1880 was the Fisk Jubilee Singers from Fisk University in Tennessee.  The African American singing group visited the farm on September 30, 1880, and Garfield told them “I would rather be with you and defeated than against you and victorious.”