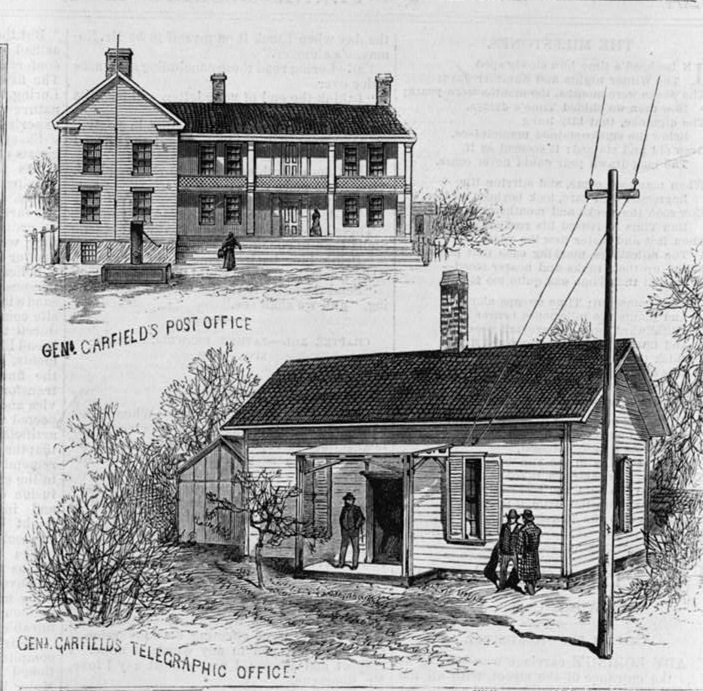 East of the path behind the Garfield Home is the campaign office.  As mentioned before, this is one of the original buildings on the property in 1876.  Garfield laid the flooring inside this building and discussed it in his diary on April 25, 1876, feeling the “old pleasure which I felt 27 years ago, when I learned how to lay flooring.” The building served as a private library for Congressman Garfield.   The books and bookcases inside the building are all original. In June 1880, his private library became a central place of communication during the summer campaign season.  A private telegraph line was installed in the building, allowing the presidential nominee to communicate with Republicans from across the country during the unfolding campaign.  The line ran from this building to the main line at Mentor Avenue.  It was part of Western Union’s and the Atlantic & Pacific Telegraph Company’s transcontinental service. Thousands of letters were answered in this building, most by Garfield himself or his private secretary and future son-in-law, Joseph Stanley-Brown. There were requests to work for the campaign, for autographed photos, and for interviews with the candidate and his family.  Groups of businessmen, farmers, immigrants, and Civil War veterans, black and white, asked to come to the farm to hear and meet Garfield. All the letters were read and replied to in this tiny one-room office.